November and December saw BSBI President Lynne Farrell looking at fungi after several very busy weeks attending – albeit virtually - BSBI’s autumn programme of big events such as the Annual Exhibition Meeting where she welcomed delegates. As 2020 drew to a close, Christmas saw her making mince pies for her neighbours and praising the efforts of NHS workers.

So how did our President welcome in the New Year? She and almost 2000 other plant-lovers kicked off 2021 by taking part in BSBI’s New Year Plant Hunt.

Over to Lynne to tell us more: 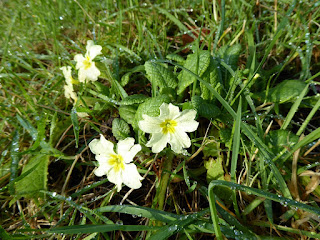 “We just managed to fit in the New Year Plant Hunt before we were locked down again on the 5th of January. Over the four days of the Hunt, more than 1,100 lists were made, over 21,000 records contributed and more than 700 different species observed.

"Clearly people were enjoying being out and about, even though some of us had to abandon one day owing to snowfall and not being able to see any plants in flower. Some people wished for proper winter conditions and this year they arrived. It may help control parasites on both plants and insects, but that remains to be seen later on.

“In Cumbria, where I live, there were 43 participants, who found 109 species, for example. I strayed into North Lancashire, three miles away, on New Year’s Day and recorded 48 species including a frozen primrose (photo above). On the 2nd of January I had to give up due to snow, which is unusual on the coast here at Arnside, and the next day I found 34 species around the village, fewer than in 2019. Frost and cold temperatures had ‘zapped’ several species.