Day One of the BSBI New Year Plant Hunt got off to a roaring start and now, for a summary of Day Two, I'm handing over to the Orchid Hunter himself, Mr (soon to be Dr) Leif Bersweden! Leif is a highly-valued member of the BSBI Comms Team, the Wild Flower Hour Team and he runs the BSBI Instagram account. He is also a jolly good botanist and a keen New Year Plant Hunter. Take it away Leif...

"Day two of the 2021 New Year Plant Hunt has seen some fantastic records flooding in from around the country. We have now reached the halfway point for this year’s hunt and, so far, we have received an amazing 458 lists and 7873 individual records covering nearly 500 different species!

As they did yesterday, botanists up and down the country have been out and about hunting down daisies and dandelions, crane’s-bills and spurges for day 2 of the hunt, all the while doing an excellent job of keeping Covid-safe and totting up some impressive lists of plants in flower.

There were more records of the usual suspects of course, with the commonest species recorded including daisy, groundsel, dandelion, annual meadow-grass, shepherd’s-purse and smooth sow-thistle, to name a few. Gorse is another, which was found flowering everywhere from Dunnet Forest near John o’Groats to Exmouth in Devon today. Sarah Watts came across a rather nice example in Killin, Scotland. 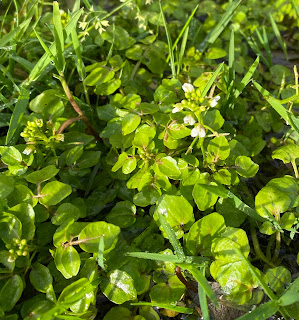 There was plenty to see in Scotland aside from gorse, with records ranging from large bittercress near Galloway Forest Park in the south west to welted thistle in Dunfermline and wild pansies on the edge of the Caingorms National Park. Further north, in Inverness, common knapweed and common fumitory were among the species to make an appearance.

Ireland has put on a good show too. Hairy tare, winter heliotrope and thyme-leaved speedwell were three of 43 species found on a hunt in Bandon, Co. Cork. Paul Green found 55 species flowering in Wexford, with highlights like grey field-speedwell, keel-fruited cornsalad and water-cress. The latter was also found in Co. Laois by Martine Brennan (on left), one of nearly 40 species on her list. Lady’s Island in the south east featured the richly-coloured flowers of common-ramping fumitory.

Botanists in Wales produced various records for green field-speedwell, for example in Caergeiliog on the Isle of Anglesey and another on the edge of the Brecon Beacons. Bristly oxtongue, field madder and wild strawberry were hiding out in the Taff valley, but didn’t escape the gaze of keen plant hunters. Cardiff was home to self-heal and Himalayan balsam, while there was water chickweed flowering on Anglesey. 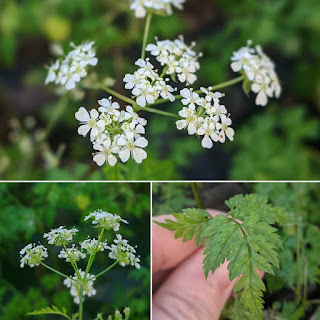 On the opposite side of the country, in the east of England, we’ve had records for sticky mouse-ear, wild clary and fern-grass in Wells-next-the-sea, Norfolk; and Jersey cudweed and wild carrot were recorded in Wivenhoe, Essex. Just like yesterday, we have more records of water bent, Jersey cudweed and narrow-leaved ragwort, three species that have been expanding their ranges in recent years. Cow parsley has featured on many lists, photographed here by Mike Hoit (on right) in Norwich.

In the Midlands, Steven Wright found the golden flowers of marsh marigold (below right) at Ashlawn Cutting nature reserve in Warwickshire, one of several semi-aquatic species recorded today. Elsewhere Leamington Spa provided botanists with cut-leaved dead-nettle, black medick and dwarf mallow. Fern-leaved beggarticks (below left) was discovered naturalised in a pavement crack in Leicester by our very own BSBI Communications Officer Louise Marsh and BSBI County Recorder Geoffrey Hall – only the second record for this plant in vice-county 55! 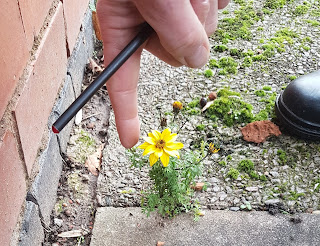 Highlights in the south included bugloss which was recorded in Dorking, Surrey; a harebell in the Chilterns, Buckinghamshire; and meadowsweet in Bridgwater, Somerset. We also had records of burnet-saxifrage near Cheddar in Somerset and in Kent.

There have been many hunts occurring around the coast today, particularly in the south of England where we’ve had thrift and hawkweed oxtongue pop up in Shoreham-by-Sea, Sussex; sea radish in Browndown Common & Alver Valley, Hampshire; rock samphire at Highcliffe, Hampshire;. Plant hunters in Pagham, Sussex found lesser hawkbit and musk stork’s-bill. Another coastal hunt to note took place on the Isle of Arran, where both sheep’s-bit and sea mayweed were found flowering in Whiting Bay.

In the north of England, Dan Brown found spurge laurel in flower at Nosterfield nature reserve, while plant hunters in Manchester were rewarded with red bartsia and wall lettuce. James Common, on his second hunt in two days, found naturalised Mediterranean spurge on a snowy road verge in Gosforth, Northumberland. 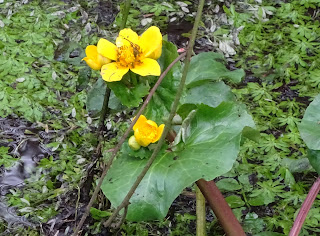 Records of spring favourites have been coming in too: primroses have been found on lots of hunts, including from the Isle of Mull and Gwaelod-y-garth in Wales. Lesser celandines have been spotted blooming in Bath and in Wexford, Ireland. In Essex there have been sightings of garlic mustard, while dogwood is blooming in Gloucestershire and wayfaring-tree in Surrey. In Cambridgeshire, among other places, there have been early dog-violets in flower.

Urban areas have featured across the country with some of today’s longest lists. Ian went for a wander around Morden Park and Cemetery in south London and totted up 64 species in flower, including small nettle, ox-eye daisy and white melilot. Redhill in Surrey was the location for Caroline who managed 61 species, while Stephen found 57 species in flower in Bridgwater, Somerset. In Peterborough, Sarah and Peter found hemlock, small-flowered crane’s-bill and henbit dead-nettle which contributed to their list of 53 species. 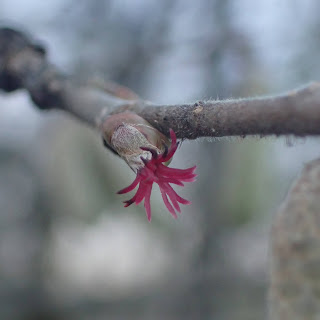 It’s not all about the little plants either – there are trees flowering at the moment too, so don’t forget to check them! Hazel, for example (on left), has featured on many lists today. The hanging male catkins are quick to catch the eye in winter, but have a closer look and see if you can locate the sea-anemone-like female flowers – they look so exotic! Charlotte Rankin came across both while on her second hunt of the year, accompanied by Ryan Clark who is one of a group of wonderful volunteers working tirelessly behind the scenes to make sure the hunt runs as smoothly as possible.

And finally, botanists are well-known for crawling around on hands and knees to look for plants and this was very much the case today too. A passing stranger was worried that BSBI Comms Team/ New Year Plant Hunt/ Wild Flower Hour volunteer Moira O’Donnell had lost something while she was out botanising; Dan Ryan in Cornwall faced enquiries about whether he was okay; and I (Leif) was questioned by a security guard while crouched down having a look at some gallant soldier growing out of the pavement in London!

Many of you have been out in the rain and snow today (I would say hats off to you, but it’s probably better to keep them on), so a big thank you for braving the elements to get those records. Stay safe, and we all look forward to seeing what day 3 brings!"