As the sun set on the final day of the 2021 New Year Plant Hunt, records of wild and naturalised plants spotted in bloom continued to flood in from across Britain and Ireland.

Volunteers who have been working in shifts on the help desk were doing a superb job processing those records.

More than 1,100 lists have been submitted so far, comprising more than 19,000 unique records, and a total of 690 species had been recorded.

All those totals are higher than in any of the previous ten years of the Hunt, and we expect that more records will be submitted before the deadline of midnight on Friday 8th January.

The total number of species may go down or up once the verification process is complete.

As the Results map shows, plant hunters were out across these islands, from North Ronaldsay where just one species, Daisy, was recorded in bloom to Jersey where there are no restrictions on meeting up in large groups and a total of 86 species was recorded, including coastal species such as Thrift, Sea Campion, Rock Samphire and Sea-purslane.

That total will go down to 83 once three inadvertently added ferns are removed: ferns do not have flowers so cannot be included.

At Milford Haven in Pembrokeshire, John and Sally notched up 25 species including Navelwort, a plant with a distinctly western distribution, while a list of 40 species from Hastings included plants such as Deptford Pink, Seaside Daisy and Rosemary

None of those species would be likely to be seen in bloom in central Scotland where icy weather stopped play for Lesley in Edinburgh and Barry found that only three of the 20-30 species he was seeing before Christmas had survived recent snow and ice; Windy Hollow Farm had also endured "very frosty" weather and not even Herb-Robert, usually a reliable New Year bloomer on the farm, was spotted this year.

Recorders across England - in Shropshire, Leicestershire and Lincolnshire also reported much less Herb-Robert in bloom during this year's Hunt.

In Fort William, BSBI Scottish Officer Jim McIntosh reported "about a third as many species in flower" compared to last year, while across the Irish Sea, Simeon hunted at White Park Bay near Coleraine in Northern Ireland - a location made famous by Game of Thrones - and notched up 19 species. 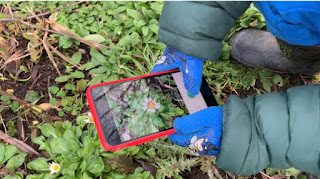 In southwest Ireland, Jean found 28 species in bloom near Kinsale and Rory found 36 species in Killarney National Park, the same location where in 2019, he found Europe's newest, rarest fern. One of those 36 species was, Rory tells us, "a dandelion with notions!"

As in previous years, New Year Plant hunters of all ages and skill levels enjoyed the Hunt: Hobie's mum told us that Hobie "really enjoyed photographing his finds and logging them into the app" (image on left).

Taking part in the Hunt helped lots of people strengthen their plant ID skills, with the help of some of the wild flower ID resources available on the BSBI website. Crib sheets for violets, strawberries, buttercups and speedwells, commissioned by Rebecca Wheeler for Wild Flower Hour and produced by Moira O'Donnell, proved invaluable for first time plant hunters such as John Feneley.

John spotted a violet in bloom and the rounded tips to the sepals, seen clearly in his photograph, confirmed it as sweet violet.

We were delighted that Moira, Rebecca and Leif from the Wild Flower Hour team joined the New Year Plant Hunt support team this year. Over the four days of the Hunt, Rebecca tweeted encouraging participation, thanking hunters and also told us about her own Hunt; Moira put in multiple shifts on the help desk answering enquiries and inputting data; while Leif's video and Instagram posts helped spread the word about the Hunt to new audiences, as did our article for BBC Wildlife.

Joshua Ajowele, who also joined the support team this year, produced a short video encouraging people to join the Hunt and over the course of the four days he retweeted plant hunters and tweeted thanks, encouragement and reminders of how to take part.

He also found time to do a hunt of his own and notched up 17 species in less than an hour in Reading, where he has been studying for a MSc in Plant Diversity. Great work Joshua!

Plant Alert intern April Webb has spent a lot of time on allotments this year - read about her research here - and she managed to fit in several Hunts in Warwickshire, including one on an allotment site, in between shifts on the help desk.

She was joined on the Plant Hunt support team this year by Isobel Girvan from Sussex Wildlife Trust and plant hunter Conchita tweeted how grateful she was for Isobel's help.

Leif told you on Day Two about the Hunts carried out by Ryan, a regular on the Plant Hunt support team, and his partner Charlotte: by the end of Day Four they had notched up four Hunts together (including one by torchlight - image below!) and Charlotte notched up a fifth one on her own while Ryan was back on the help desk.

Great work from both of them and from support team regulars Ciara and Ellen.

Technical problems with the app this year caused problems for recorders for which we can only apologise - they also caused a lot more work for the support team and especially for BSBI Database Officer Tom Humphrey. 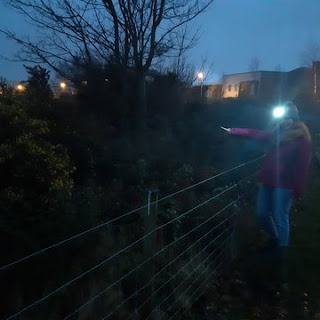 Without the 13 volunteers who worked alongside Tom and other staff members behind the scenes, the Hunt could not have gone ahead and we owe them all our thanks, but we would also like to say a huge THANK YOU to all of you who took part!

So to end, a reminder to please submit all records before the deadline - midnight on Friday 8th January - so Ellen can start work on the analysis.

We will share her analysis here and on the New Year Plant Hunt webpage later this month but for now we'll leave you with this collage (below) by Dan Ryan of the plants he spotted during his Hunt in Cornwall. 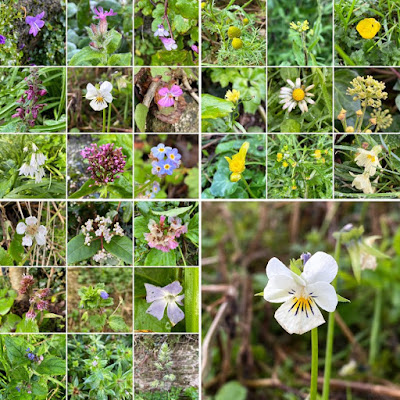