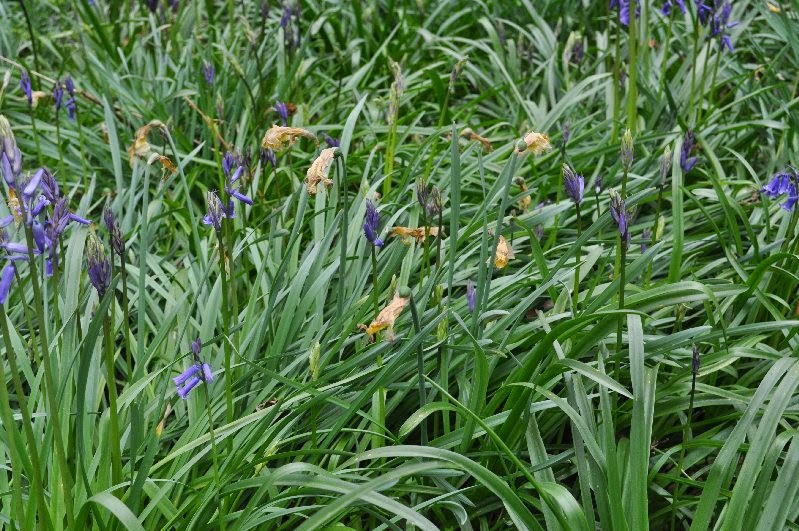 "Two target species of which records were needing updates was for Narcissus pseudonarcissus (Daffodil / Wild Daffodil) and Sedum telephium (Orpine) both of which are Northamptonshire Rare Plant Register species.

"The great news is - we located both species on the day. About three clumps of the orpine were seen not far from the parking area on the road side embankment, of course not in flower at the time of the meeting. The wild daffodil on the other hand was well gone over and was located in just one small area of the wood (image on left).

"Mantles Heath is also ancient woodland and again had some interesting records. One surprise was seeing a large bush of Philadelphus coronarius (Mock-orange) on the wood edge bordering the road and it did not look planted this time around. Adoxa moschatellina (Moschatel) was noted in a number of places while Ranunculus auricomus (Goldilocks Buttercup) and Lysimachia nemorum (Yellow Pimpernel) were also recorded.

"One nice surprise was Chrysosplenium oppositifolium (Opposite-leaved Golden-saxifrage) which for us in Northamptonshire is still classed as rare as mentioned in the Flora of Northamptonshire and the Soke of Peterborough (Gent/Wilson 2012). It was found growing on the embankments of a small stream near the wood edge bordering the golf course. There are records for Vicia sylvatica (Wood Vetch) from Mantles Heath as recorded by myself in the noughties, but the small clearing where it once grew is now sadly chocked up with brambles and no Wood Vetch was located.


"After the meeting in the pouring rain I went to check the edges of a couple of bean crops near Boddington Reservoir to see if I could re-find Scandix pecten-veneris (Shepherd's-needle) of which the last record was mine back in 2005. There are only two other current sites in Northamptonshire for this species. To my sheer delight I saw at least 18 seedlings, which is brilliant news".

Shepherd's Needle is a really nice record, and the meeting sounds fun (weather notwithstanding), but it's a shame if Vicia sylvatica has been lost from the site.

Want to send us a report of any recording that you are doing on your home patch?
Posted by Louise Marsh, BSBI at 23:58