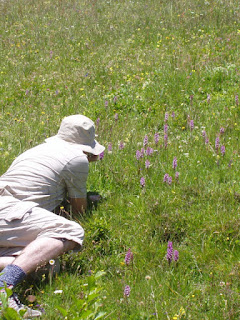 The image shows Terry photographing an orchid Gymnadenia sp. in the Bernese Oberland. We wish Terry all the best in his future plant-hunting and hope he enjoys his prize. We also encourage you all to consider paying your BSBI membership subscription by Direct Debit!
Posted by Louise Marsh, BSBI at 13:29 No comments: 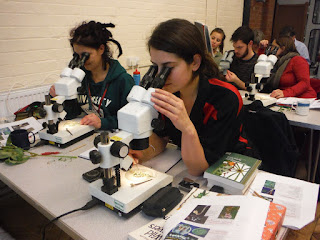 Applications are flooding in for BSBI Training Grants, designed to help aspiring botanists at all skill levels sharpen their ID skills. They are ideal if you are thinking of signing up for one of the short plant ID courses listed on our new training courses webpage, or if you have been accepted onto this year's Identiplant intake.

You can apply for up to £250 but you'll need to get your skates on - we've already heard from lots of you since we opened for applications on 1st January, so don't delay, apply today!

Our new grants webpage also gives details of all the grants for botanists of which we are aware, whether from BSBI or other organisations. These range:
There really are grants for everyone, whatever your current level of botanical skill or expertise! And if you know of a source of funding which we have missed, please let us know and we'll add it to our grants page.
Posted by Louise Marsh, BSBI at 13:21 No comments: 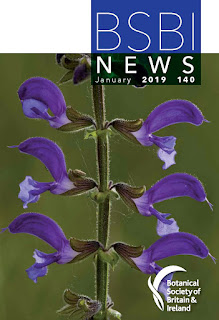 The latest issue of BSBI News, our membership newsletter, has been published and is being mailed out to BSBI members this week. Editor Andrew Branson allowed me a sneak peek at the January issue and here are just a few of the many highlights:
There are also articles about photographing wild flowers, reports on newly found alien plants, country round-ups, flyers so you can book on forthcoming BSBI meetings...

The January issue has 84 pages to delight and inform botanists at all skill levels!

If you are not a BSBI member - or if you are a member but have neglected to renew your membership - you won't have the pleasure of hearing your copy of BSBI News coming through your letterbox later this week.

Included in this week's mailing will be the BSBI Yearbook which gives full contact details for all BSBI's 100+ expert plant referees, along with various other inserts such as Summerfield Books' latest catalogue of botany books and any special offers exclusive to BSBI members.

So don't delay: head over to our membership page now!
Posted by Louise Marsh, BSBI at 20:46 No comments:

New Year Plant Hunt: analysed and in the media

The analysis of BSBI's eighth New Year Plant Hunt has now been published and is available to download here.

The 627 species you spotted across Britain and Ireland were analysed by Kevin Walker, BSBI's Head of Science, and here are some of his key findings:

You can view all the records here and click on a list to see what was recorded in your local area.

We're still talking to print journalists about how they are covering the Hunt, so watch this space!
Posted by Louise Marsh, BSBI at 19:17 No comments:

Blaeberries - also known as blueberries - are one of the botanicals used in the Bird Cherry expression of Byron's Gin. This may be less surprising to you than some of the other botanicals used in Byron's Gin, such as aspen, lady's-bedstraw and Scots' pine. Blaeberries are, after all, well known as an edible berry and can even be found for sale in supermarkets. In recent years they have become known as a "superfood" as they have a high level of anti-oxidants.

They are certainly delicious - anyone who grew up in a part of Britain or Ireland with access to moorland is likely to have memories of childhood collecting trips, when for every berry that went into the collecting basket, another one was eaten, resulting in blue-purple lips and tongue - impossible to hide the evidence of greedy guzzling from Mummy!

Blaeberries have also been used as a dye plant and as a traditional herbal remedy. Flora Celtica tells us that they were "taken to treat diarrhoea and dysentery on Arran and in the Western Isles" - hmmm, anyone who has over-indulged in guzzling blaeberries, and suffered the consequences, might raise an eyebrow at that suggestion! They also have a reputation for "improving eyesight and treating ophthalmological problems... during the Second World War. According to popular belief, [they] became the secret weapon of the RAF, sharpening night vision and helping to secure victory".

Others might think that was a cunning plan devised by airmen to make sure that, despite rationing, they managed to get some blaeberry jam on their toast! Fortunately you won't need to resort to any such subterfuge if you want to try a drop of gin containing blaeberries - just buy a bottle of Byron's Gin 'Bird Cherry' expression - and don't forget to let us know if it makes your eyesight sharper next time you go out botanising!
Posted by Louise Marsh, BSBI at 23:57 No comments: 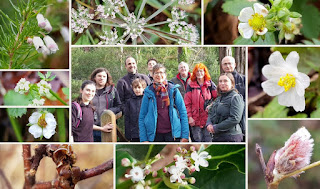 This year's New Year Plant Hunt is now over and it has been a real record-breaker!

Thousands of you took part, from Stromness on Orkney to Guernsey, Jersey and Alderney in the Channel Islands; from Bayfield in north Norfolk to Three Castle Head in south-west Ireland, from St. Margaret's Bay, Kent to the Isle of Doagh off the coast of Donegal.

You submitted more than 14,000 records and told us about 638 species that you had spotted in bloom. 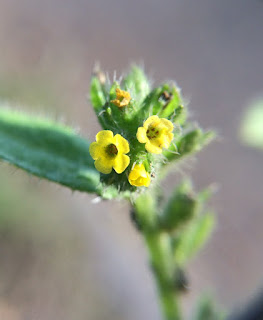 It has been astonishing watching all the red markers appearing on the Results map and seeing all the photos and comments across social media. This year, more of you than ever before seem to have opted to go out in groups, either small groups of family and friends or larger organised recording groups, so the Hunt has been a very social occasion.

The photo above shows recorders at Glengarriff Woods Nature Reserve in west Cork and some of the flowers they spotted. This is the sixth year that there has been a New Year Plant Hunt at  Glengarriff, organised by County Recorder Clare Heardman (who took the photo) and people always seem to have a great time!

Members of recording groups such as the Cumbria Botany Group and the Darlington & Teesdale Naturalists' Field Club have been out, both en masse and individually, and have submitted multiple short lists while the Devonshire Association Botany Group went out just once but notched up an impressive 88 species in bloom during their Hunt in Goodrington. 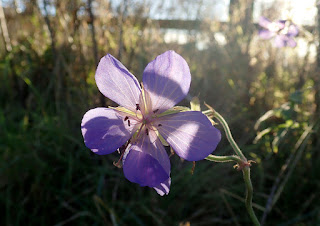 On Day Four of the Hunt, we saw some interesting and/ or unexpected plants, especially in southern England, such as fiddle-neck Amsinckia micrantha, spotted in bloom in East Hants. by Cathy Wilson (above left). In Sidmouth, Karen Woolley was surprised to find meadow crane's-bill, Geranium pratense (on right), blooming on a road-verge.

Tom Forward and friends spotted small scabious blooming on Malling Down and Kelli Imms found Bacopa Sutera cordata, a garden plant originating from south Africa, blooming in Worthing. It isn't frost-hardy, so is unlikely to naturalise, but it was interesting to hear of it growing as a casual. 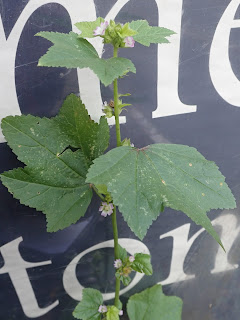 In Cambridge, ace botanist Chris Preston recorded Chinese mallow, Malva verticillata (on left), while over in Co. Wexford, Paula O'Meara found dwarf mallow Malva neglecta (below right) blooming in Belview Port. The last record for the county was in Kilkenny more than 50 years ago!

Paula tells us that the security guard at the site came out to speak to her as she was leaving but rather than telling her off , he said that he'd realised what she was up to and did she have the app? The fame of the New Year Plant Hunt is obviously spreading far and wide! But now that the Hunt is over for another year, and while we are waiting for Kevin Walker, BSBI Head of Science, to analyse the results (his analysis is due out here on 29th January) what other botanical treats can we look forward to?

Well here are a few things for you to consider: 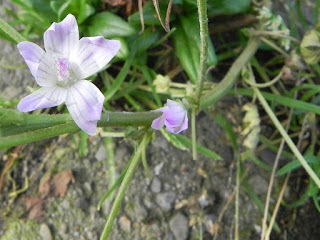 If you are new to plant-hunting, have you checked out our 20 Helpful Hints to help you get started in botany? They include things like a review of wildflower ID books in print, support available on social media, and much more.

For the next step, how about the National Plant Monitoring Scheme: it's fun to do, it provides valuable data about how our plants and habitats are changing, and there is lots of support available (training meetings and videos, local mentors, a free ID book).


If you haven't already registered, please take a look here for some background and then head over here to find out if there's a square available near you.

If you feel ready to undertake a training course to sharpen up your ID skills, check out the BSBI Training page with links to all the courses we know of and a range of training grants of up to £250 to help you pay for them.

And if you're already an experienced botanist, maybe undertaking research, the Training page also has details of Plant Study Grants and Science & Research grants to apply for.

So whatever your skill level, there will be some botanical treats for you to explore this month. Meanwhile all of us on the New Year Plant Hunt Support Team - Brian, Ciara, Ellen, Ian, Kevin, me (Louise), Mary, Natalie and especially Tom our technical whizz-kid - would like to thank you for making this year's Hunt the most successful ever - THANK YOU!
Posted by Louise Marsh, BSBI at 23:59 No comments: