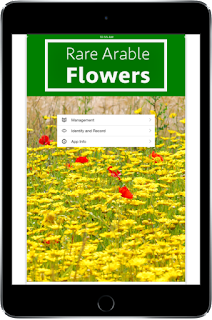 Have you seen the new app from the Centre for Ecology & Hydrology (CEH) which aims to help farmers and land managers identify the 'arable weeds' growing on their land?

The app uses data collected over time by 1000s of BSBI volunteer recorders. BSBI Head of Science Kevin Walker said "It’s great to see BSBI's distribution records being put to such good use in this app.

"The BSBI's last Atlas of the British and Irish flora, published in 2002, was instrumental in showing the dramatic decline of these species following the introduction of more intensive farming methods in the 1950s.

"Most of these species are now incredibly rare and it is important that land managers can not only identify them, but also manage their land sympathetically so that these species survive and flourish. 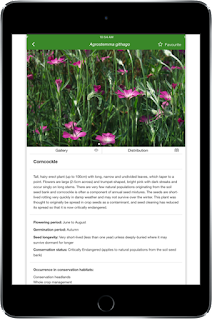 "The app is another great example of botanists, scientists, conservationists and land managers working together for the benefit of our wonderful wildflower heritage".

Markus Wagner at CEH is a key member of the team behind the app and sent us this comment and a request for BSBI members to help spread the word about the app:

"Knowledge of the locations of remaining populations of threatened arable plants is crucial for their preservation. However, such species tend to be under-recorded, due to restricted access to arable land, and the fact that most are annuals, sometimes with highly variable establishment across years, depending on crops planted and on climate. 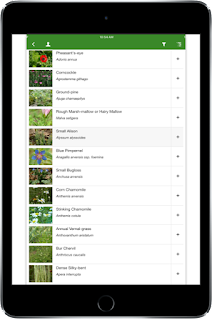 "We would thus like to encourage BSBI members & supporters to alert any farmers and landowners of their acquaintance to try out this new app which also provides valuable information on sympathetic management of sites".

Many thanks to Markus for telling us about the app and for providing the images on this page.

If you are coming to the BSBI Annual Exhibition Meeting (AEM) in November, you will be able to hear a talk about the app and see a demonstration of how it works, given by Markus and his colleague Karolis, app developer at CEH. Booking for the AEM opens next month so keep an eye on this page for details. Meanwhile, try this video about the app which features Markus and some very pretty flowers!
Posted by Louise Marsh, BSBI at 00:02