Botanising on Shetland Part One

Lots of southern botanists have been heading northwards recently.

Paul Smith and his team are out in the Outer Hebrides and this year's Shetland Recording Week is also well underway, with more than 30 botanists on the island right now.

Ian Denholm travelled up to Shetland from Herts. and has been in touch with this report:


"Coming from a south-eastern county, one of the fascinations for me of a region like Shetland is seeing plants that are extremely rare back home being present in absolute abundance, and ones that are ubiquitous at home being considered local rarities.

Epilobium palustre (Marsh Willow-herb) has a single site in Hertfordshire but in Shetland it carpets just about every bit of boggy acid habitat (and there is a lot of that!). 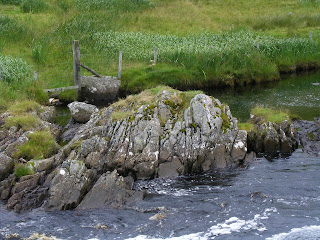 It is also, in my opinion, by far the most attractive member of a rather undistinguished and deprecated genus.

In contrast, Geranium robertianum (Herb Robert) is astonishingly rare as a native plant in Shetland.

It has one site on the beach in a rocky inlet (voe), where it carves out a tenuous existence at the mercy of heavy waves and soil dumping (which nearly led to its extinction in the mid 1990s). I have yet to track it down!

Amongst the special plants of Shetland are a number of endemic hawkweeds (Hieracium) that are not only challenging to tell apart but are in many cases represented by tiny populations in remote localities.

The rock shown in the photograph (above) extends into another voe and contains the entire world population of Hieracium attenuatifolium (Laxo Burn Hawkweed).

On a visit there yesterday, Paul Harvey of the Shetland Biological Records Centre, Anne Middleton and I counted five flowering plants and a few non-flowering rosettes.

Shetland also has its share of exotics – plants imported as food or for aesthetic reasons that have become naturalised or hang on in the vicinity of abandoned crofts.

My favourite of these is Senecio smithii (Magellan Ragwort) – masses of huge white flowers and rhubarb-sized leaves.

I see no evidence of this spreading by seed; it simply seems capable of persisting for long periods and maybe propagating vegetatively".

Many thanks to Ian for this report and the images. You can follow the latest news from the #BSBIShetland2016 meeting here on Twitter.
Posted by Louise Marsh, BSBI at 21:47